Showing posts from September, 2013
Show All

Song: "Ruby" by Kaiser Chiefs (with the exceptions of altered lyrics in the verses) Ruby the Copycat (c) Peggy Rathmann This took me about 3 1/2 days to finish (excluding time to think up of the lyrics). Just moments after I watched Ruby the Copycat I sorta got reminded of this old Kaiser Chiefs song. This isn't exactly a parody, more like... ehh.. I don't really know what do you call "altering song lyrics but not being funny" in one word. Basically in this story, Angela sings the whole song... with the exception of Miss Hart singing the second chorus. And probably in the finale the whole class sings the final chorus altogether. Also, I kinda noticed that in the last part Miss Hart's skirt isnt completely colored :( ah well. I'm kinda too lazy to fix it. I'm also too lazy to draw the rest of the kids joining Ruby hopping about, just blank snow people will do). And the part with Angela and Ruby wearing teal shirts & holding teal b
Post a comment
Read more

all patterns and no shading peaceful portraits

It started out just drawing a random profile picture for myself cuz I needed one. I might've found a picture with this kind of style (lots of lineart + flat colors) online and thought of making one for myself. But once all my 3 sisters, their friends and one of my friends found out, they wanted one for themselves too. Man, it felt like the Black Parade Fangirlness days all over again where everyone wants a drawing in a certain style from me. But hey this one took fast (not so fast with the tedious patterns) and I could probably do like four-five in a day. So much purple... why is purple so popular D: second batch:
2 comments
Read more 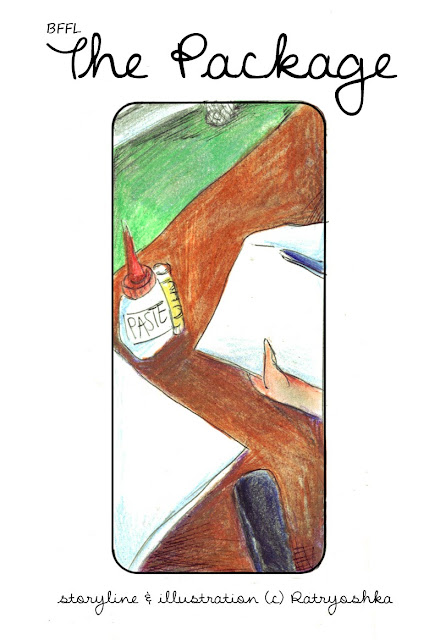 After the so-called success of my BFFL short comic remake (and its animated video)  remake back in 2008, I tried continuing the series in 2010. The storyline is based off of BFFL's storyline back when I made it in 2001 of course, and I wanted to see/show how Kree gets creative with her packages, cuz that's one of the things she's good at. (If I channeled my copycat quirks on Julie and tomboyishness on Petie, I could be channeling my paper crafting fondness on Kree). Regarding the title, I was torn between naming it "The Package" or "The Parcel", also I was planning on naming the first chapter "The Encounter" because that was the first time Julie met Kree and tried making friends with her in a Ruby-The-Copycat-esque way. I was planning the things shown off and copied in this comic will be two types: a D-I-Y paper notebook and a wooden handpainted pencil case. In the original comic storyline Kree's gonna show Jul
Post a comment
Read more
More posts